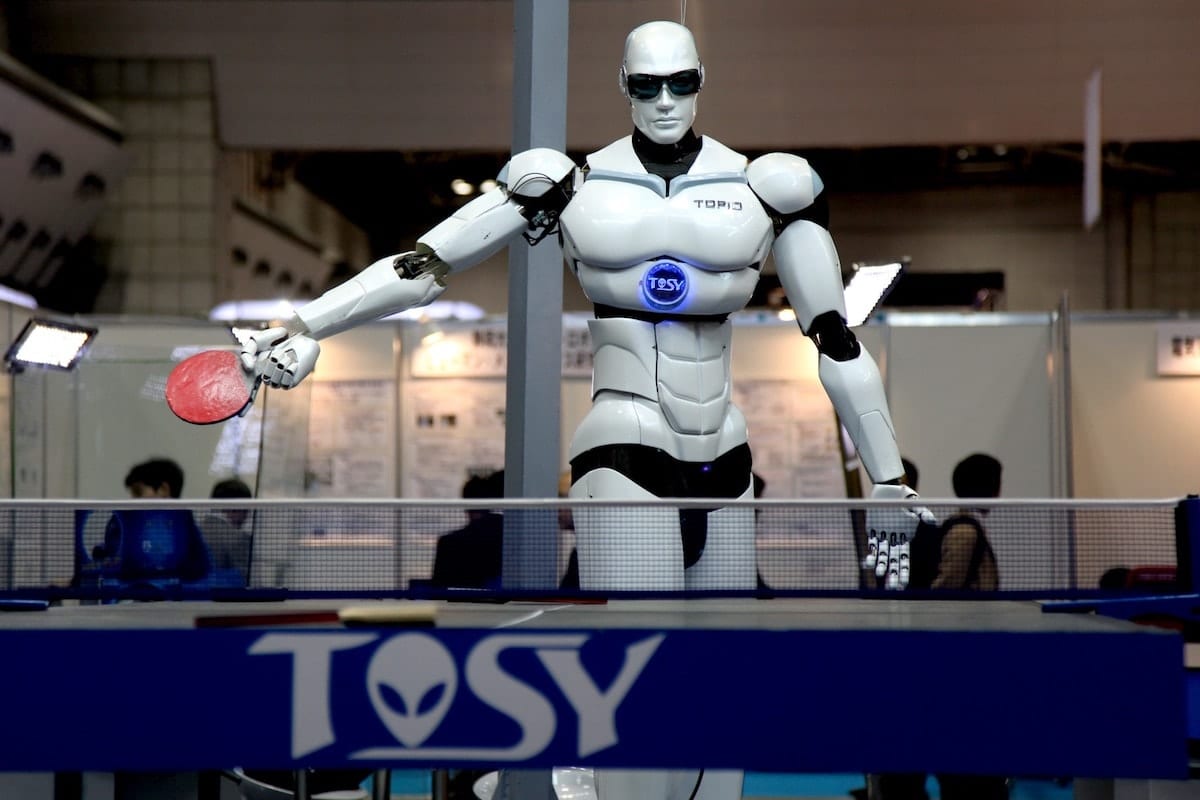 Before robots replace us entirely, we will first have to learn to live and work with them… And that means robot insurance.

Do you remember the SNL skit from 1995 with Sam Waterston as a “compensated endorser” for Old Glory Insurance?

In the skit some old ladies are chatting about how the world is falling apart with all the “gangs” and “rap music”… And robots.

One of them says, “Darren and I have a policy with Old Glory Insurance that covers us in case we’re attacked by robots.“

Will we all need insurance to protect ourselves from marauding robots in the future?

But one things for sure, as robots do more and more human jobs, their presence at work will present challenges for insurers.

Industrial robots have been around since the 1950s… Mostly relegated to being confined to cages and cordoned off areas to protect co-workers.

Indeed, robots are working in Amazon warehouses, performing surgery, making pizza, driving and helping to enforce the law. But as robot co-workers, aka “robocowos” or “cobots” (collaborative robots) do more and different types of work, it’s safe to assume that new forms of robot insurance will become more commonly issued in both 1st party property and 3rd party liability coverage.

New robot insurance forms are being created by pioneering insurance carriers, such as Lexington, a division of AIG, to address risks related to artificial intelligence (AI), advances in machines, such as self-driving cars, autonomous robots, drones and other technologies.

However advances in artificial intelligence and robotics are happening faster than any one carrier can handle.

Governments, legislators and international standards bodies like ISO1 are struggling with the issues of how to deal with emerging robot technologies. Meanwhile, the robotics industry is expected to grow to $151 billion by 20202, and risks will become even more complex.

As such, the potential for bodily injury and property damage when “human meets robot” may increase exponentially.

Some scientists predict an artificial intelligence explosion, much like the Big Bang. In this scenario, scientists expect that AI systems will become recursive, allowing AI and robotic machine learning systems to build new intelligent robots themselves, constantly improve and fix themselves if necessary, with no need for human involvement.

At this point, the technological growth of our robot overlords becomes uncontrollable and irreversible.

Scientists do not agree when this may happen, with estimates ranging from within 30 years to never. However, if a global cycle of robot and artificial intelligence is set in motion, will we be able to stop it, or know the cause, or who to blame, for robot related insurance claims?

What Does Robot Insurance Cost?

Robots already do work for us, but they are are expected to do more in many industries, from transportation to the law.

As puny humans creating gods, how can we protect ourselves from the predictable risks and reduce our exposure to claims from artificial intelligence and robot problems?

Robot insurance is made to protect businesses and individuals from claims related to mistakes, malfunctions and design flaws from robot-related accidents.

Robot insurance coverage types are currently limited, with only a few carriers offering coverage. Much like cyber insurance coverage, policy coverages are not standardized. Also, technology is advancing rapidly and there is not enough actuarial data to properly price the risk of many robot applications and their exposures.

This actuarial uncertainty is reflected in the cost of robot insurance. Policies are written by specialty underwriters who price risk based on the information they have on the robot technology, its construction, the environment it is used in, protective measures and co-worker exposure.

The cost of robot insurance depends on the rate charged by the insurer multiplied by the exposure. The rate reflects the loss history, known safety of the robot environment and potential severity of loss. The exposure is determined by a measure of frequency, such as sales or FTE equivalent of hours a robot “work”, over the course of a year.

What are Robot Risks?

Companies are developing new applications for robots on a daily basis. Applications range from robots that can make pizza or have sex or play ping pong.

Consumer robots, such as the Roomba automated vacuum robot made by iRobot are becoming commonplace. Prototypes of more advanced, humanoid robots are being developed by Honda and Boston Dynamics that may be used in complex manufacturing and military applications that are currently only the domain of humans.

The potential bad situations that could arise from the aforementioned applications are left only to the imagination.

While robots are often more predictable than humans at some tasks, robots are also known to malfunction due to software or hardware errors, as well as from human error.

When a robot fails to work as it should the result can be property damage, injury or even death.

In such an event, robot insurance would be there to provide coverage for bodily injury to others, property damage, medical bills, business interruption, and loss of income. If an employee was injured on the job due to a robot, the result would be covered by workers compensation. However a death caused by a robot on the job could lead to an employer’s liability claim, such as loss of consortium by a spouse, or other claim.

Some robots have caused disruptions and even death. In 2015 a contractor at a Volkswagen plant in Germany was killed when a stationary robot grabbed and crushed him against a metal plate.3 In 2017, a security robot drowned itself in a fountain, and a Russian robot escaped from its enclosure and caused a traffic jam when it went out onto the nearest street.

Robot Ethics… Who is Responsible When A Claim Happens?

Philosophers have long pondered questions of right and wrong in certain situations. But when it comes to robots making life or death decisions, how will the software decide?

Imagine a 60 year old passenger traveling in an autonomous vehicle (AV). Suddenly a child runs out into the road chasing a ball. There is not enough road for the car to stop and avoid the child… The AV software must make a decision:

A human is going to die…

What is the ethical thing to do?

The insurance industry and legal experts expect that as robots and artificial intelligence become more commonplace, the liability will shift away from consumers and be absorbed by the automotive industry and to manufacturers of robotics products… But it remains to be seen.

One thing is certain, the convergence of technology, ethics and responsibility puts insurance companies in uncharted territory.