An additional insured (AI) is a person or organization who is insured under the insurance policy of another party, at the request of that other party (the “named insured”).

However, to be added as an AI, you may need a direct contractual relationship with the named insured.

As such, it’s important to be aware of the differences in additional insured endorsements that can affect your coverage.

What Is An Additional Insured?

As mentioned above, an additional insured is a party that is insured under the insurance policy of another party.

AI status is common in liability insurance1 however, it does not exist in a vacuum.

AI status is often required by written contract and accompanied by an indemnity agreement (aka a “hold harmless”) between the named insured, the indemnitor, and the to be insured party, the indemnitee.

And whether you are party to the contract may affect your AI status.

Your specific situation and the contractual agreements between you and other parties to the agreement will ultimately determine which AI endorsement is appropriate and whether you have coverage.

Am I Covered As An Additional Insured?

Whether you are covered by the insurance policy of another party depends on the written contract language and the policy endorsements of the named insured:

The following are types of commercial general liability AI endorsements that you should be aware of because each of them affects additional insured status differently.

The term “blanket additional insured” sounds like it means broad coverage, however, this is not the case. A closer reading of the CG 20 33 “blanket AI” endorsement indicates that it requires the parties to have a written contract in place.

As such, you may need the broader CG 20 38 which includes AI status for other persons or parties required by written contract.

AI status is common in commercial solar development projects and AI status may be found in many situations.

The situations below list the party receiving AI status in bold and the named insured providing AI status (in parentheses):

In some cases, all of the above may be requested to satisfy additional insured requests from various parties. 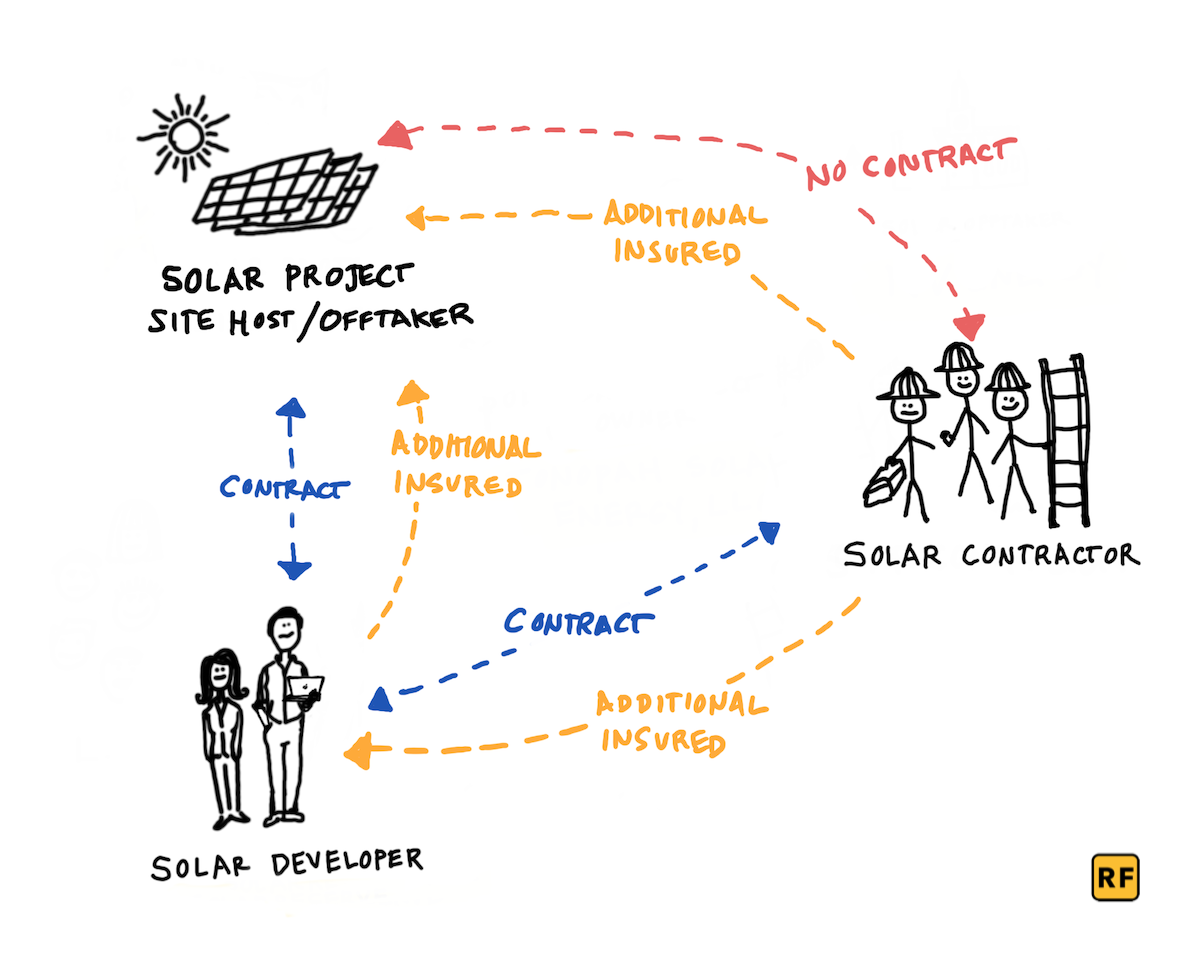 Solar developers may sell their projects or develop and operate them… In the latter case, a developer may hire a 3rd party solar installer after a project is ready to be built… In this example there are three parties:

This is a common solar developer insurance scenario with three parties3 however additional parties may be involved.

The contract also states that any sub-contractors that the solar developer uses will:

However, the solar installer does not have a direct written agreement with the real estate owner.

As such, the CG 20 33 “blanket additional insured” is not a good choice.

As mentioned above, the CG 20 10 and CG 20 26 specifically schedules the name of the additional insured party on the endorsement itself.

In contrast, the CG 20 38 provides coverage for parties you are required to add as an additional insured, in addition to the party for whom you are performing operations.