If you are a building contractor doing business in New York City, you are most assuredly familiar with the term “action over“… But what are the ins and outs of action over as they pertain to the insurance you need to run your business?

The following provides a description of what an “action over” insurance exclusion is and how you can avoid one in your insurance program.

If you are wondering about the cost of contractor insurance in New York, you can also read my article about action over coverage cost.

What is “Action Over”?

An “action over” (also called a “third party over action” or “third party action over”)1 is a type of multi-party claim brought by an employee who suffers an injury under New York Labor Law 240 or 241.

An employee in New York cannot sue his or her employer for tort injury (personal injury) unless the employer intentionally caused the injury… And employees injured on the job must recover any compensation for injury or lost wages through their employer’s workers’ compensation coverage.

However, according to an article by Kate Browne, Senior Claims Expert at SwissRe, Labor Law 240 and 241 impose absolute liability on construction companies, property owners and/or contractors who are responsible for maintaining a safe work environment.

As such, personal injury lawyers promote the fact that while employees may not directly sue their employers for workplace injuries, they may sue the building owner or a related third party…

Especially if they believe the third party is partially responsible for their injury.

Where parties are found liable, the average cost of a NY Labor Law claim is over $1,000,000 and can be even more extreme in some cases.

For example, on December 10, 2014, a jury awarded $62 million to a single plaintiff, a Chinese immigrant named Zeng Guang Lin, who fell from a rooftop at a Bronx construction site. The plaintiff suffered a traumatic brain injury, multiple spinal and rib fractures, a lacerated spleen, renal hematoma and lung contusions. The jury awarded $20 million for past pain and suffering and $42 million for future pain and suffering.

Depending on the contracts you use and the insurance you have as a contractor, you may be exposed to an action over lawsuit.

As such, you should be aware of dangerous exclusions such as action over, a hammer clause  or others, in your business insurance program.

Here is an example of how a third party action over claim, like the one above, could happen.

ABC Properties in New York City hires XYZ Contractors to do a construction job on a ground up multifamily tower in Manhattan.

The contracting company signs an agreement to do the work. XYZ agrees to indemnify and hold harmless ABC Properties in the event of a lawsuit. XYZ also names ABC Properties as an additional insured on its general liability policy.

After the work begins, Bob, one of XYZ’s employees, is injured on the job.

Bob goes to the hospital for treatment and is out of work for a long time… The result is a $500,000 worker’s compensation claim.

XYZ is lucky that it has workers compensation as required by state law, which should cover Bob’s injury. 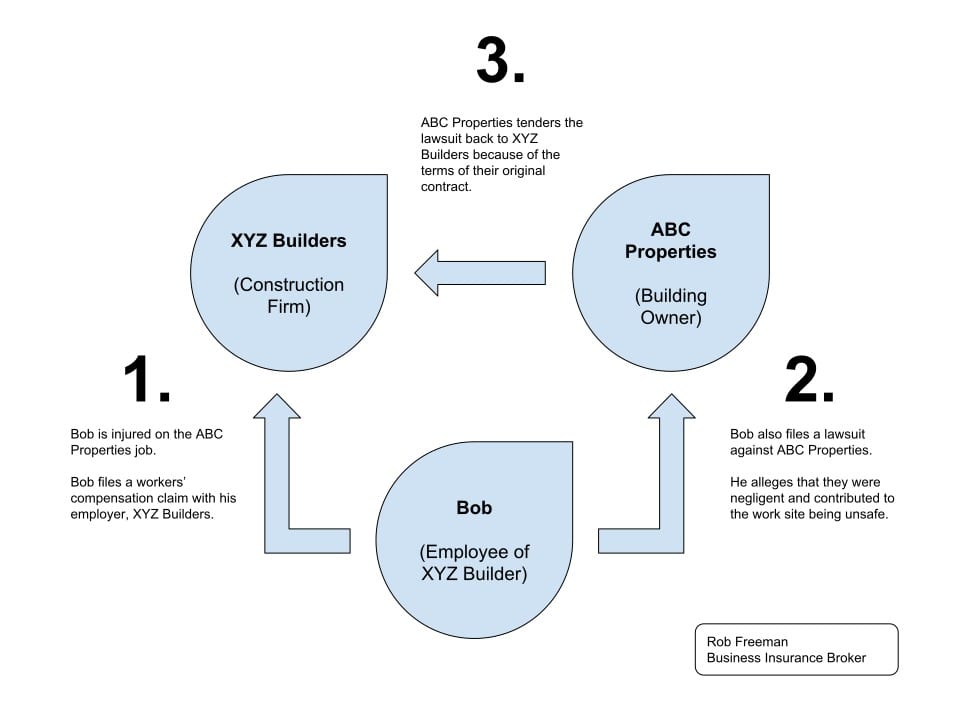 However, Bob believes that ABC Properties was negligent and is also responsible for the job site being unsafe.

ABC Properties receives notice of the lawsuit… But then tenders the claim back to XYZ because XYZ agreed to indemnify and hold ABC Properties harmless in the event of a lawsuit.

What will happen to XYZ now?

Indeed, EL coverage can provide coverage for some types of situations involving “action over”.

Not so in XYZ’s case above… Unfortunately because employers liability coverage specifically excludes liability assumed under a contract, XYZ will not have coverage there.

As illustrated in Step 3 of the diagram above, XYZ assumed liability for ABC Properties in its contract.

What is an Action Over Exclusion in the GL?

In many cases, the General Liability policy will then step in when employers liability coverage will not.

Will this happen with XYZ?

Perhaps… But insurance companies that offer General Liability coverage in the New York City construction marketplace are increasingly seeking to incorporate absolute exclusions to action over.

Another term for action over exclusion is an “absolute employer’s liability exclusion”… Or it may be referred to as a “contractual liability amendment“.

At the end of the day, you should check with your broker and read your policy thoroughly to check for exclusions that may expose you to liability in the event of third party negligence…

Action Over and Solar Contractors Doing Business In NYC

Don’t be caught off-guard by a bodily injury or property damage claim that shuts down your business.

Contact me, schedule an appointment or call 203-200-0445 to protect your livelihood as a contractor in New York City.