If you are researching the cost of solar panels and solar power purchase agreements you may have seen the word “offtaker” and wondered … What is an offtaker in a solar PPA?

Put simply, an “offtaker” is the purchaser of renewable energy in a solar development project.

What Is An Offtaker In A Solar PPA?

An “offtaker” is one of three parties in a solar development project called a power purchase agreement, aka “PPA“.

There are three parties to a PPA:

The solar investor may fund the project or be part of a capital stack that includes other equity and debt from a lender, such as Wunder Capital.

The investor may be a solar tax equity partner who has tax appetite for incentives (such as the solar ITC) and wants to finance the project.

The Importance of the Offtaker

Regardless, the developer wants to find a credit-worthy offtaker to purchase the renewable energy produced by the project.

Creditworthiness is important to the developer, investor and/or lender because the offtaker is committing to purchasing the renewable energy from the project for up to 25 years.

Offtakers have wide-ranging levels of creditworthiness and credit scores… At the high-end of the credit spectrum are public companies like Google, Apple or Microsoft. They are like “super offtakers“… Because they have impeccable, investment grade credit and they buy a ton of renewable energy!

The rest of the offtaker world spans a broad range of credit rated borrowers that will be subject to financial credit and risk analysis. Indeed, some private companies, schools, municipalities, non-profits, etc. may have no credit rating at all.1

Below is a diagram of a solar PPA in which the offtaker is a school.

In this example, the school wants to buy the green energy from the solar project, but it doesn’t have the budget to purchase the solar panels itself. Even if it did have the money, the school might not be able to take advantage of the tax benefits of solar.

The school also has no financial credit rating. 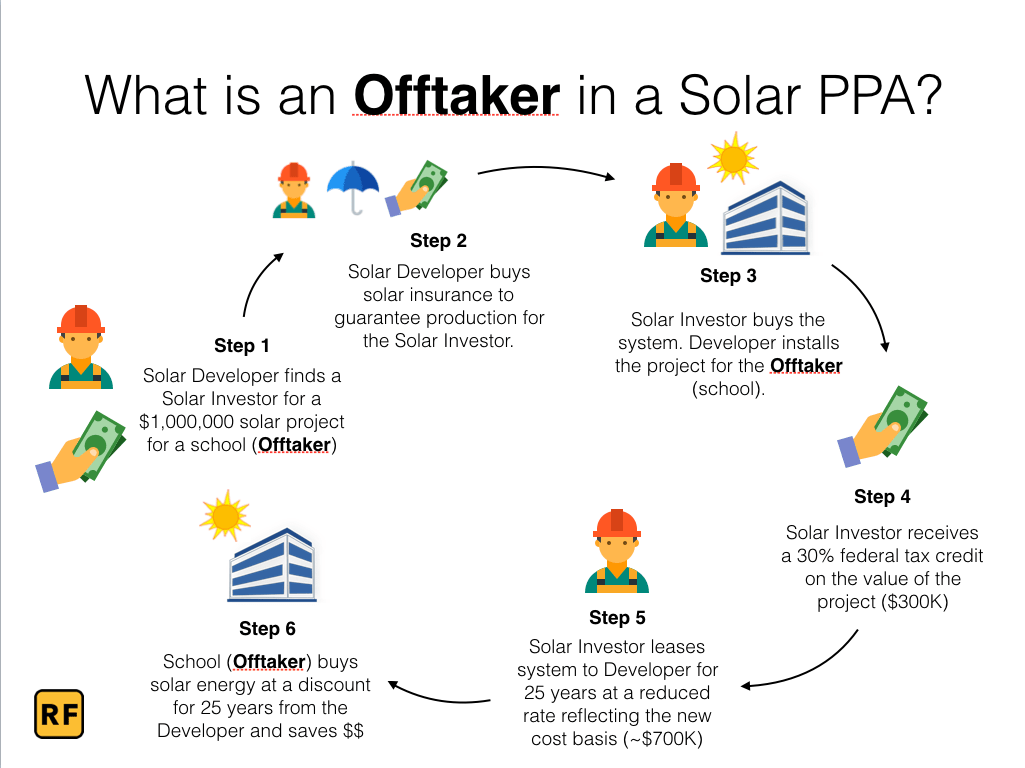 To reduce risk of default, the solar developer buys offtaker insurance as a form of credit enhancement to unlock project financing for the school.

The investor finances the project to develop the project for the school, in return for a long-term commitment from the school to purchase the renewable energy.

What Happens in a Solar PPA?

The solar developer identifies an opportunity with the school, ties up the project and secures financing that may include debt or tax equity.

The Solar Developer sells a school on a $1 million solar project for their campus. The school agrees that it wants the system, but it can’t pay for the system itself because it doesn’t have the budget.

Note: The solar developer may be “full service” developer who will design, procure and construct the project, or the developer may hire a 3rd party solar contractor to install the project once the system receives approved by the utility, local municipality, etc.

The developer also purchases solar property insurance to protect the project assets from physical damage and protect the income stream from business interruption. If the solar project is large enough, such as with industrial or utility size solar projects, the developer, the school and the investor may also decide on insuring solar production.

The investor gets the 30% federal solar investment tax credit (ITC) and MACRS accelerated depreciation to reduce their tax liabilities.2

In this example, the Solar Offtaker is the school.

In return for having the solar system installed for free, the school agrees to enter into the PPA to buy solar energy from the investor for 20 years, usually at a discounted rate compared to their utility rate.3.

Because the school has no credit rating, the developer protects the payment stream of the PPA with solar offtaker insurance.4

In A Solar PPA… Everybody Wins

In the end, everybody wins in this solar PPA scenario…

The Solar Developer wins because they get to build the solar system for the school and work with the Solar Investor.

The Solar Investor wins because they reduce their tax liabilities through the 30% federal tax credit and other incentives. The investor also gets a stream of cash flows and other financial benefits from the long term lease to the Solar Contractor.

The Solar Offtaker (the school) wins because it gets to buy clean renewable solar energy at a discount from what they would otherwise pay to their utility.

How did Babcock Ranch survive Hurricane Ian with its massive flooding, 20 inches of rain and the 150 mile per hour winds it unleashed on the area?

What Does Solar Farm Insurance Cost?

Solar farm insurance cost varies by coverage type, such as property and commercial general liability, and the specifics of your project.

What Is The Solar PTC?

The reinstatement of the solar PTC has broadened the tax credit options for solar developers in the U.S… Should you choose the solar PTC or solar ITC?

Get affordable commercial auto insurance for your fleet or business and reduce employee risk with these five cost reduction strategies.

Fire department service charge coverage may be a sub-limited amount, or exclusion, in a homeowner’s property or auto insurance policy.

What Is Employment Practices Liability Coverage?