If you’re asked to provide a letter of credit it helps to know the difference so you can request a change to a surety bond, if needed.

What Is A Solar Surety Bond?

Surety bonds may be used as a credit enhancement strategy in solar development projects to help reduce – or eliminate – the risk of default in the payment stream to a lender or equity investor.

How Does A Surety Bond Work? 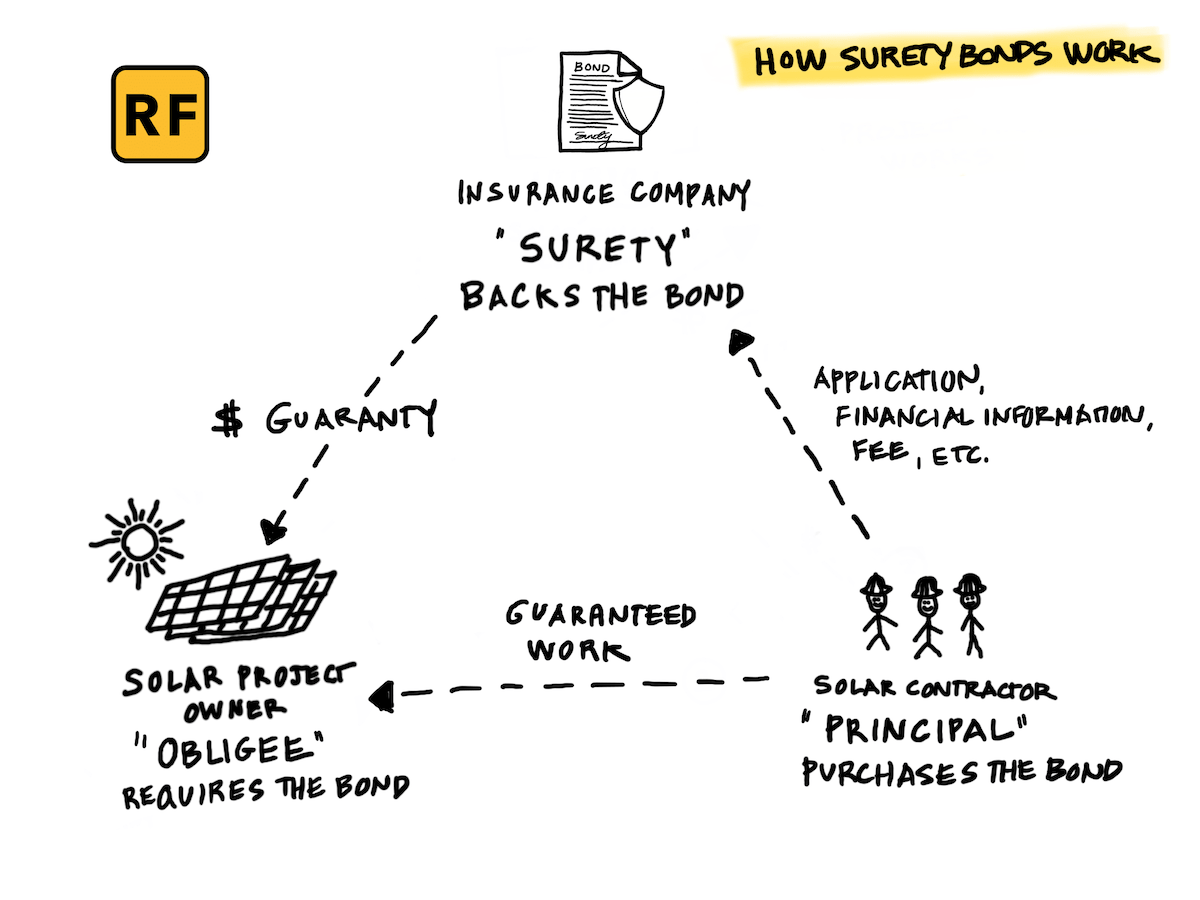 In the diagram above, the principal completes an application and provides financial information on the company and/or the owners to the surety for underwriting.

During the underwriting process the surety will consider your business’s work history, credit score and business and/or personal financial records to determine your reliability.

If the bond is approved, the principal pays a fee to issue the bond and the surety guarantees that the work will be done according to the agreement between the principal and the obligee.

If the principal fails to perform according to the terms of the contract, or the work is not completed, the obligee will notify the surety who will investigate and step in to make sure the work is completed.

The principal is required to reimburse the surety for any costs associated with the completing the project.

What Are Types of Solar Surety Bonds?

Solar surety bonds can guarantee important aspects of the solar development project, including:

Other types of solar surety bonds may include a performance bond, payment bond or bid bond.

How Much Does A Surety Bond Cost?

It costs nothing to apply for a surety bond.

However, you will pay a fee (premium) to issue the bond. The fee can range from 1-3% of the total bond amount depending on the financial risk profile of the principal and the type of bond.

If your business has good credit, you will generally pay less for your bond. However impaired credit and perceived risk in a project may raise the cost of the bond premium to as much as 15%.

If you need financial assistance, you can find resources to guarantee bonds from the SBA Office of Surety Guarantees or the Surety and Fidelity Association of America.

If you are a new business owner in need help with a bond, you can schedule an appointment with me.

What Is A Letter Of Credit?

Like a surety bond, a letter of credit (“LOC”) is also an agreement between three parties that provides a performance or financial guarantee:

The applicant/guarantor pledges funds to guarantee the letter of credit. The LOC is issued by the bank for the benefit of the obligee in the event of a default by the applicant.

A Letter Of Credit Is A “Demand Instrument”

Unlike a surety bond, a letter of credit is a “demand instrument” operating under contract doctrine.

This means that the bank’s obligation to pay the obligee is separate and independent of the agreement between the applicant and the obligee.

In other words, the obligee may demand the money without having to prove a breach of the underlying contract. The letter of credit does not look to the terms of the contract between the obligee and the applicant, it only looks to the requirement to pay between the bank and the obligee.

The bank must honor the request, regardless of whether the applicant (i.e. you, the solar developer or contractor) actually defaulted on their agreement.

How Much Does A Letter Of Credit Cost?

A letter of credit typically costs 1% of the guaranteed amount, plus additional fees. However, the up front costs should be considered with the totality of costs associated with the LOC and the potential loss of access to working capital, etc.

Bond vs. Letter of Credit: Which Is Better For A Solar Contractor?

IMHO, when choosing a bond vs. letter of credit, a surety bond is preferable to your business as a solar developer.

This is because a surety bond provides the guarantee of performance for the obligee, but is less restrictive to your business and includes reasonable checks and balances in terms of performance of the contract.

Obligees may prefer a LOC because it’s easier for them to demand the money.

However, in the event of a dispute between you and the obligee, the surety verifies the situation and the end result would be the same, the project would be completed and/or the obligee would be paid1.